Inside The Computerized Lettuce Factory Of The Future Farming, even in its modern, hyper-industrialized form, still relies on some very old-school technology: the sun, dirt, seasons, tractors. It’s all a bit messy and inefficient, at least by the standards of modern technologists, who are more accustomed to server farms that churn through data 24/7.

It’s not that surprising, then, that the self-declared farms of the future look more like an Amazon data center than an organic apple orchard. A wave of companies are rushing to figure out how to grow commercial volumes of food in giant urban warehouses, using LED lights instead of sun, and stacked shelves of nutrient solution instead of soil.

This particularly tech-centric model of urban farming us run by computer systems that monitor thousands of points of data and constantly adjust growing conditions. Marc Oshima, co-founder of AeroFarms, one of the world’s largest vertical farms, says the company uses “in-depth growing algorithms where we factor in all aspects from type and intensity of light to nutrients to environmental factors like temperature, humidity, CO2 levels, and we create the perfect recipe for each variety.”

While conventional agriculture companies engineer their crops to design plants suited to their environment — improving mildew resistance, for example — these companies are engineering the environment to match the plant.

None of this is cheap to set up. New Jersey’s AeroFarms has raised more than $50 million and says it can grow 2 million pounds of food each year in the “growing towers” in its 70,000 square foot facility in Newark. Gotham Green invested $8 million to build a rooftop farm in Chicago’s Pullman neighborhood. In February, New Jersey startup Bowery Farming, which attracted $7.5 million in a seed round, began selling locally grown leaf vegetables at Whole Foods and a few area restaurants, including Tom Colicchio’s Craft in Manhattan.

These high-tech farms — often led by entrepreneurs with backgrounds in finance and other non-farm businesses — are “definitely more expensive, but the expense is balanced out by more productivity,” said Irving Fain, CEO of Bowery and former Citigroup investment banker. Bowery estimates his facility is 100 times more productive per square foot than a typical farm.

Fain said Bowery’s operating system automatically monitors “hundreds of thousands of points of data on plant health, quality, growth, yield, taste and flavor.” Bowery is also designed to “take processes that are manually intensive and automate them” so that “the farm runs itself,” more or less. And because the environment is tightly controlled and there are no seasons, there are more harvest cycles — AeroFarms has up to 30 harvests each year. 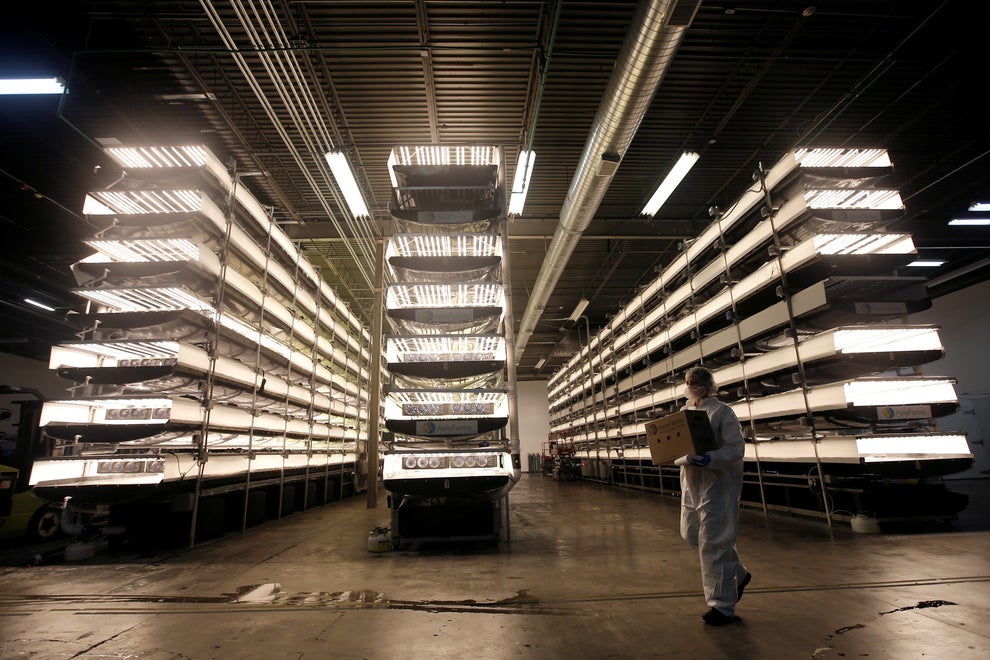 So far, these capital-intensive indoor farms have focused on growing trendy greens that can be sold to the area’s salad-eating yuppies — baby kale, butterhead lettuce, arugula, and basil. A box of AeroFarms greens goes for $3.99, and Bowery Farming’s salad greens retail for $3.49, which is a lot more than a head of iceberg lettuce. And that’s the main challenge these startups face: there’s no shortage of cheap produce in supermarkets today.

It’s a pricey, niche product for now, but the companies have bigger plans. “As we scale, we plan to continue to drive down our costs and deliver the highest quality produce at a price that makes it even more accessible to all,” said Fain.

Oshima said AeroFarms is looking at other crops: berries, peppers, and cucumbers. “Our lens is on how we can transform agriculture around the world,” he said.

Realistically, these vertical farms “will never grow enough to feed cities,” said Danielle Nierenberg, cofounder of the nonprofit Food Tank. Grains like wheat, for instance, simply require more space than a warehouse can ever provide. But at the very least, she said, they bring some fresh food to urban communities, and may one day even create a new type of urban green space.

Bowery grows its greens hydroponically in a commercial warehouse in Kearny, New Jersey. The company says its farm requires 95% less water than a traditional farm and uses no pesticides or chemicals — and its location means its greens need to travel less than an hour to make it onto Manhattan restaurant plates.

These products can’t be called organic — that label generally refers to food grown in soil —so Bowery describes the model as “post organic.”

“This is the next evolution in produce,” said Fain. “The USDA’s organic standards were written at a time when the technology that’s available today simply didn’t exist.

The high startup costs associated with these ventures — the lights, the software, the urban real estate — mean the risks are also high. “Unless you’re in a place with geothermal power, this can be very energy inefficient,” said Food Tank’s Nierenberg. “In the same way we romanticize rural agriculture, we can romanticize growing food in urban places.”

In January, the hydroponic farm FarmedHere closed its 90,000 square foot facility in Chicago and pulled the plug on plans to invest $23 million in a new farm in Louisville, Kentucky. The company’s high labor and energy costs meant it needed to sell huge volumes of produce to break even, CEO Nate Laurell told the Chicago Tribune. “The more I learned about the reality of farming, it led to a change of strategy”

Atlanta vertical farm PodPonics closed last year. Its co-CEO Matt Liotta recently spoke of the tough realities of the business at an industry conference. PodPonics achieved a cost per pound of $1.36 — less than the cost of shipping organic lettuce from California. The company had an offer from Kroger to order $25 million woth annually, if it could build the farm to support it.

“This was our wildest dream, we were ready to go, this was everything we wanted. And then we realized how much capital this was going to require, how many people we were going to have to hire,” said Liotta. “We were simply incapable of building everything they wanted.”

“This is really a manufacturing game,” Liotta said. “It is not an art. If you want to do art, get a garden.”